Published on May 7, 2013 by Middletown in Music, Shows 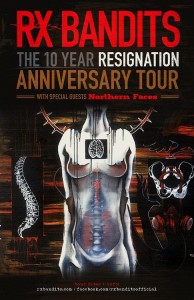 Oh man – I haven’t been this pumped for a show in some time! Yesterday, Rx Bandits announced a summer reunion tour in celebration of the 10 year anniversary of the Resignation – one of my favorite albums of all time. It was one of those records that I could leave in my car cd player for days at a time. Heh, cds… it really has been 10 years.

They’re stopping at the Metro on July 24th to play the album front to back, followed by a second set of other songs.

I was one of the lucky few to score VIP tix which include some exclusive merch, a pre-show and most exiting – a meet and great with the band! I’ve got a couple months to craft some amusing anecdotes. I am in possession one extra VIP ticket, so let the ass kissing begin…

Pre-sales went fast, but tickets go on sale at noon on Friday through the Metro box office.

It was about 90 degrees outside when they last played Chicago in 2011 and about 100 inside the Bottom Lounge. The band has been on hiatus since then, but in the meantime, members have been plenty busy making music. Matt Embree release an EP with Lisa Papineau under the moniker ME & LP, recorded an experimental album as Biceratops with RX drummer Chris (C-gak) Tsagakis, and has also played solo shows as Love You Moon. Steve Choi has a somewhat hardcore side project called Peace’d Out and spent some time filling in on guitar for Zechs Marquise. It’s been nice to get a taste of jams from the boys for the last couple years, but I couldn’t be happier that RX Bandits are getting back together, and from the sounds of it, putting out some new music as well!